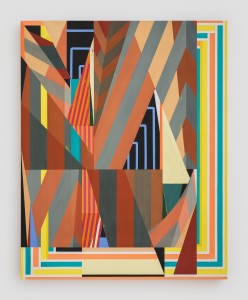 Written communication inspires Amy Sinbondit (Cleveland Heights) and Kristina Paabus (Oberlin). Sinbondit balances geometry and gesture in ceramic sculptures comprised of swirls and curves borrowed from letter forms. For her multi-layered screenprints, Paabus chooses stencils that function like letters of the alphabet—placed together, they make meaning. Although her graphite drawings resemble Op Art, they reference the artist’s struggle with insomnia while living in Estonia, where winter brings only a few hours of daylight.

Janice Lessman-Moss (Kent), Erik Neff (Newbury) and Gianna Commito (Kent) explore geometry in textiles, painting and sculpture. Lessman-Moss expands upon weaving’s basic geometric grid structure with the explosive designs of her jacquard tapestries.  Trained in art and entomology, Neff composes his sculptures from the wood scraps he uses to heat his studio, which is situated in a rural, wooded setting. An intuitive decision-making process shapes his oil paintings, which feature soft, block-like forms. Commito builds layer upon layer of paint to create subtly textured, multi-colored canvases with shifting planes of repeating stripes, x’s, squares and diamonds. 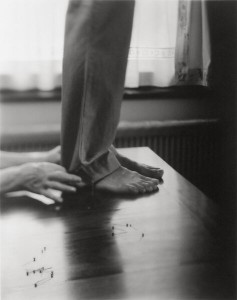 Andrea Modica’s photographs are distinguished by their imagination, exquisite compositions and impeccable craftsmanship.  As an artist and educator, Modica is influential in her use of traditional processes—an 8 x 10 inch view camera and platinum palladium contact printing—that result in lush tones and rich visual statements.  Her cumbersome equipment requires Modica’s subjects to be complicit in how they are represented, and her openness to what they bring allows the artist to achieve evocative images that she describes as “a marriage between the photographer and what the world brings to the picture.”

Andrea Modica will present the Fred and Laura Ruth Bidwell Lecture at the Akron Art Museum on Thursday, February 4 at 6:30 pm.

Artists have long prized printmaking as an ideal means of addressing social issues because of its ability to create artwork that can be shared with large audiences. In Specter, which consumes the Isroff Gallery at the Akron Art Museum, Charles Beneke extends the possibilities for how prints can be presented and engage audiences. Beneke’s hand-printed silkscreen and woodcut wallpaper cascades off the gallery wall and billows into the room. As opposed to being presented in folios or frames, his prints accumulate to form a threatening cloud that redefines the gallery space. Beneke uses repetitions to parallel the repeated human behaviors that accelerate climate change. He invites viewers to participate in his artwork by offering them a print in exchange for their promise to examine those behaviors and reduce their personal carbon footprint. 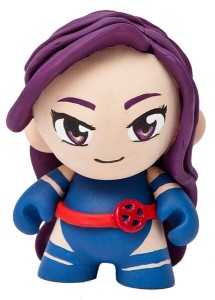 A boat that can’t stay afloat and a train with square wheels are just some of the misfit toys featured in the 1964 Christmas classic Rudolph the Red Nose Reindeer that served as the inspiration for the Akron Art Museum’s annual Island of Misfit Toys Family Drop In. The event, which will be celebrating its tenth anniversary this year, invites families to create original works of art out of old, broken toys.

This year the museum will celebrate the event’s anniversary with a special exhibition.  The exhibition asks local school children and professional artists to transform Munny, blank vinyl dolls, into works of art. Students decorate them using pens, pencils, markers, paint, found objects and other supplies. The student-made Munny dolls will cover the inside walls of The Mary S. and David C. Corbin Foundation Gallery, while the outside walls will display Munny by professional artists, paired with their original artworks. This wall will be curated by Rob Lehr of Summit Artspace.